I was involved in MWO’s first festival in 1989. The productions that year (The Magic Flute and Carmen) were both designed by a young Charles Edwards. It was all hands on deck in those early days so alongside singing in the chorus I also helped out as DSM backstage. I was even called on to drive the theatre van down to an antique dealers in Monmouthshire to pick up 12 bentwood chairs for the priests to sit on in Flute!

Mid Wales Opera (or Mid-Wales Centre for Opera, as it was known in its inaugural year of 1989) was my operatic debut as a professional bass-baritone, singing the roles the Speaker, 2nd Priest and 2nd Armed Man in The Magic Flute. Many happy memories of this production include working with a highly talented cast – many of whom are still great friends thirty years on – and the coaching from the wonderful musical staff – Derek Clark and the late Paul Hamburger.

For me, working with Mid Wales Opera, just after I’d left college, was a crucial, invaluable stepping stone into the profession. From the care and excellent work with our director and conductor  (Ian Watt Smith and Derek Clark) to the kindness and support of our hosts and opportunities provided by the team at MWO, I was guided and encouraged to make my way forward.

The seemingly simple yet complex and vital task of being ready as a young performer. Learning about life on tour (our production of ‘Cosi Fan Tutte’ was MWOs first foray into touring) ..navigating the wonderful Welsh countryside (not least learning how to drive through a herd of cows) ..Focusing on performing in a theatre with the film ‘Nuns on the Run’ playing at full volume in the hall next door was a memorable challenge.

And I made a lifelong friend from that tour. Congratulations and grateful thanks to MWO! I have enormously fond memories of Mid Wales Opera, indeed it is where I cut my teeth professionally, and I will always be grateful to this wonderful company for kick-starting my career. So many incomparable memories; of driving round mid-Wales in a 7.5 tonne lorry with the entire set in it trying to work out if we would fit under that bridge, get-ins that usually involved trying to get bits of set up a spiral staircases or through an upper-storey window, and the amazing sense of company camaraderie that existed and that made me fall in love with working in opera. 30 years- here’s to the next 30 and well beyond!

Emily Gottlieb
ASM for Don Giovanni in 1993, La Boheme in 1994 and others, now CEO at National Opera Studio

At one venue on my first entrance as Mimi, I knocked the door; it stuck; I tugged; it hit me in the mouth! I spent the whole of Act 1 with a thick lip… I’ve also never forgotten running around the outside of the theatre in Cardigan, on a particularly cold night, in a flimsy nightdress, as there was no cross-over. Touring was never dull! That’s how I learned my craft. Great memories. I will never forget directing a contemporary Aida for Mid Wales Opera, using only video footage from the Gulf War projected onto a front gauze and two iron cages.  We must have been mad to even consider it, but somehow we assembled a vast orchestra, the largest ever chorus (possibly until this date), six dancers and the Newtown Silver Band: never mind the Gulf War – we almost blew the roof off the Theatr Hafren. For a flavour of this MWO opera, imagine the film Cabaret on steroids or, in reality, on Mike Pearson (Mephistopheles) who was the onstage architect of every scene, conjured up in the rehearsal room by Stephen Medcalf.

This was a show that included dance routines, magic tricks, German stormtroopers, stockings and suspenders (also worn by Mike) and a love scene that ended with Liz and I bursting through a Wendy house roof. Need I say more.

We never had the same Berta for more than one performance due to illness. As Basilio I lifted my Cassock to reveal fishnet stockings and did the cancan to my Calunia aria. Much to the disgust of a row of ladies in Shrewsbury. Apparently a vicar called it a disgrace in the local news. What I loved about MWO was the ethos of the production, the fabulous chamber orchestra, the economy of set and double casting certain roles as done originally. It meant that for someone like me, who loves a challenge it made for a full rewarding evening.

So that was quite an apprenticeship!

When two strangers (Barbara McGuire and Keith Darlington) turned up at Theatr Hafren where I had my first job, and said they wanted to stage an opera festival, my boss and I embraced it with open arms as something to vary the routine of our small receiving theatre.  Little did I know that thirty years on I would still have the privilege to be part of this amazing, enduring, innovative and friendly company.  Picking a favourite show is hard but Stephen Medcalf’s Welsh take on The Bartered Bride was good fun with its choir practice, Eisteddfod, dance, rugby team and visiting circus.

I’ve done many roles – stage manager in 1989 and 1990, wardrobe on tour 1991 (with baby in tow), assistant production manager till 1999 and then production manager for the shows  on which my husband Bob was lighting designer, and since 2010 Production Manager overall.  I’ve also had to walk the role as an ugly sister in La Cenerentola and Don Ottavio in Don Giovanni (!), and stand in for sick ASMs and DSMs.  My real role on tour is Production Manager and Relights, and I’ve been actively involved in building every set, but we are a small team and we all lend a hand wherever is necessary – that’s what keeps us going!  I’ve never sung (except in a scratch Messiah) – in fact I remember Keith saying to me as I went on as Tisbe “Whatever you do, don’t sing!”.

We can’t get the pate for tonight’s act 2 momus scene said the crew in theatre Felinfach. No problem said I. But there it was and I ate it like I did every night with the French stick. It was cat food. My problem was I loved it so much was that people would frown if I had it again. And I’ve been able to get my leg behind my head ever since. 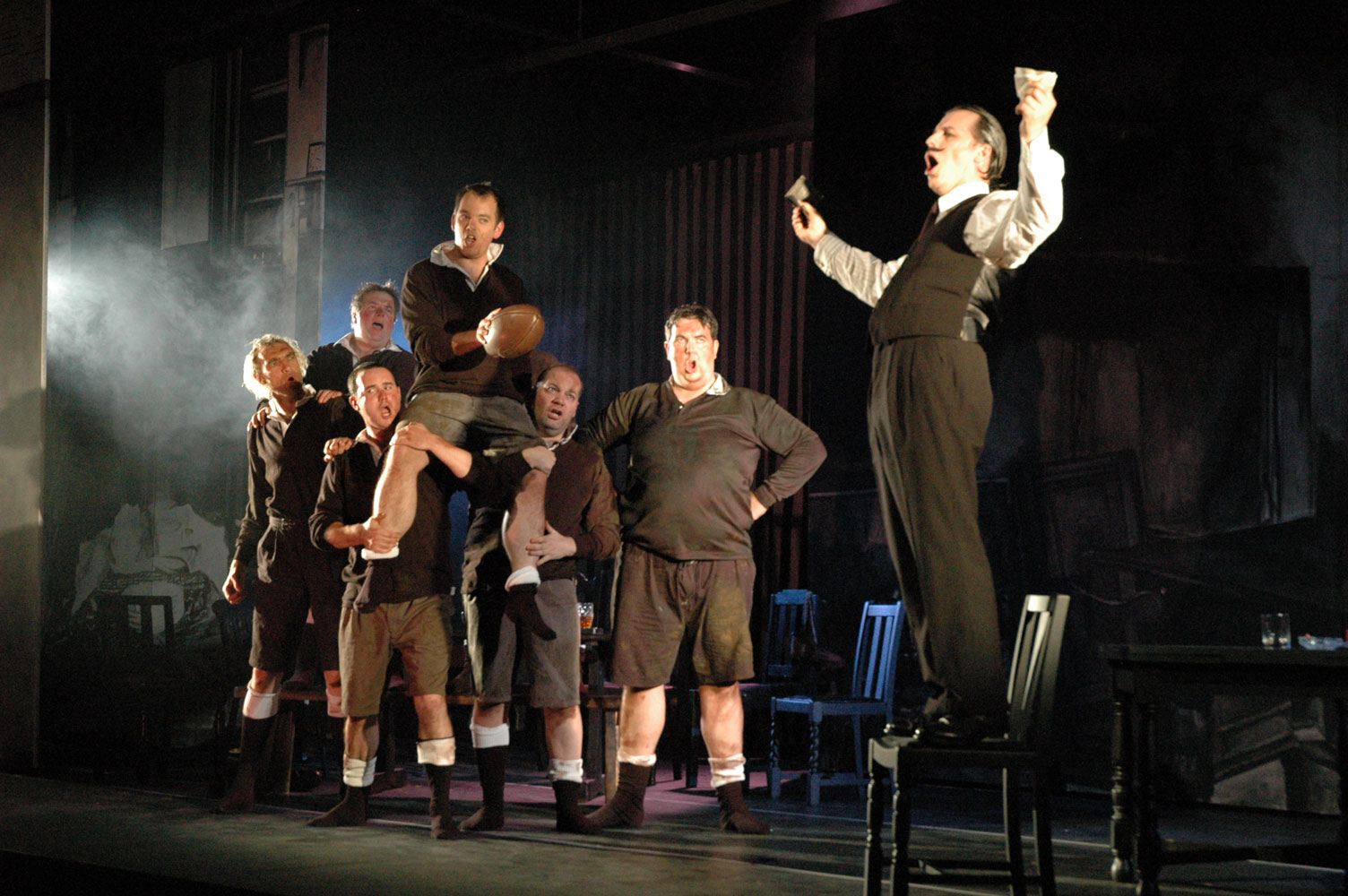 The Tales of Hoffmann (Offenbach)
“

Of the many operas I took part in for MWO, my most memorable is Tim Hopkins wonderfully evocative production of ‘The Tales of Hoffmann’, in 2008. A notoriously difficult piece to mount, not least because of its many versions, Tim created a concise and seamless adaptation in which I plumbed the dark depths of my soul to depict the four Villains. I loved it!

Wyn Pencarreg
The Tales of Hoffmann 2008 Carolyn Dobbin as the Muse, Wyn Pencarreg as Lindorf & James Edwards as Hoffmann
“

Singing the role of Nicklaus in tales of Hoffmann was one of the most rewarding things I’ve ever performed for many reasons. It was one of my first proper sized roles out if college, it propelled me from student to professional in a very short space of time. It gave me huge amount of stage time and performing experience with about 32 shows! I loved the character of Nicklaus as he was sometimes visible and then invisible on stage but always the one manipulating what was happening in each scene. I was Hoffmann!

It was the first time that I truly explored all the gorgeous crevices of Wales, I instantly fell in love with the stunning scenery and the beautiful people. It was a truly magical time! As a result of singing this role I was offered a small role at WNO and further roles after that as associate artist there. It will always be a special place and time in my development as a singer and I will always return to Mid Wales Opera for those reasons.

In more recent times I’ve adored working with Jon and Richard and the new team… and will always return to work with them whenever asked!

Carolyn Dobbin
The Tales of Hoffmann 2008

With so many happy memories of my time with Mid Wales Opera, it is hard to pick just one production. But I’ll choose my first, FALSTAFF. The wonderful Charles Johnston and superb cast, Martin Lloyd Evans’ clear, unfussy production, and a musical score to die for, which translated so well to the 10 piece ensemble, of such talented and dedicated players. The camaraderie and rigours of touring, the excellent crew led so ably by Bridget Wallbank and the knowledge that we were bringing Live Opera to so many. It kick started a wonderful time with such a well run, friendly company. 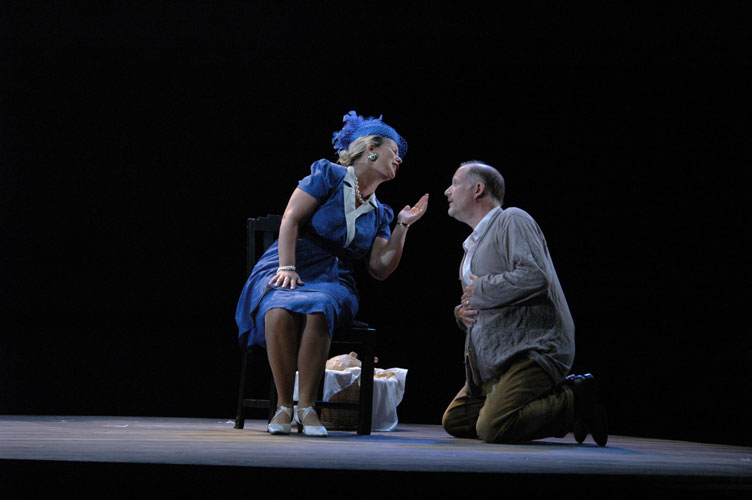 It was great to have been a part of the 2013 production of Albert Herring, playing the role of Mr Upfold, the Mayor, during Benjamin Britten’s centenary year.  With a cast made up of soloists we became a real family during the long tour.  The beauty of working with Mid Wales Opera is that it takes opera into places and communities which aren’t served by the major Opera companies and it celebrates new talent. – Lee David Bowen Heldentenor

Some productions can come and go, but the MWO Magic Flute has really stayed with me. The rehearsal process was fantastically efficient – Jonathan and Richard know exactly what they want – and we came up with an unabashedly entertaining show. From major theatres to quaint local halls (the Matryoshka doll-like set somehow shrinking and expanding to fill both, whilst staying perfectly preserved), audiences were hugely appreciative. And of course…those trousers. What a great show this was – everyone involved (on and off stage) brought such life to the piece. I only wish the time spent on this show went as slowly as the slo-mo action we all had to act when in these beautifully made clocks. From the first minute, to the last (Spanish) hour, it was one olé after another! I personally can’t wait to work with Mid Wales Opera again.