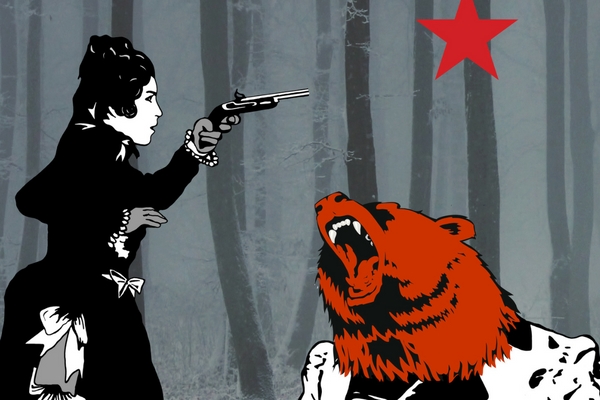 Discover Opera:  The Bear to launch MWO’s SmallStages This Autumn

As a company, Mid Wales Opera has always been dedicated to bringing quality opera to places where it is rarely, if ever, seen.

We have performed in more than 80 mid-scale theatres right across Wales and England – but we wanted make use of some of the fantastic little theatres, halls and spaces we know and love but which are too small to take our major touring work.

We also wanted to strip away some of the barriers which keep people from attending opera performances – giving audiences the chance to experience an intimate staging of well-produced, carefully crafted and professionally cast opera closer to home.

What Are We Touring?

We want our SmallStages work to focus on light and engaging pieces of 20th century opera which are rarely seen. They need to be fun for audiences, and able to be performed by a cast and band of 10 people or fewer. For our first year, our Music Director Jonathan Lyness has created a brand new version of William Walton’s The Bear, which celebrates its 50th Birthday in 2017.

This short, just an hour long, opera is performed by three professional singers, set to a backdrop of the pre-revolutionary Russia of the 1880s.

What is the history of The Bear?

Walton’s The Bear is based on a comic short play by one of the greatest short story writers, Anton Chekhov. Fully titled The Bear : A Joke in One Act it is one of his early comedies and less well known than many of Chekhov’s other works such as ‘The Cherry Orchard’ and ‘The Seagull’.  In 1967, English composer, William Walton adapted the short story as an Opera. Walton’s interpretation retains much of the original work, resulting in a lighthearted comic opera that involves just three characters.

The opera’s sung in English and just an hour long, so it’s perfect for first timers who want to give opera a go as well as more experienced opera-goers keen to experience this brand new orchestration of a rarely performed classic.

It opens with the young widow Madame Popova and her servant Luka. Mme Popova has not left home since her husband died a year ago, and as she tells Luka she is determined things should stay that way :” I shall never go out…. Why should I? My life is already at an end. He is in his grave, and I have buried myself between four walls…. We are both dead.”

Her husband was certainly no angel – he repaid her devotion with endless affairs, leaving her alone while he spent her money and chased other women – but she intends to prove her love for him despite his faults by giving up her own happiness, buried alive in the home they shared.

Their argument is interrupted by a knock at the door, and enters Smirnov – a frustrated oats salesmen owed over one thousand two hundred rubles by Popova’s dead husband. She simply does not have the money to pay – but Smirnov is not taking “no” for an answer and refuses to leave.

The more they argue, the more impressed he is by her independent spirit until she demands he leaves, shouting at him “bear, bear, bear” and he challenges her to a duel, for which she is happy to dig out her husband’s old pistols as long as Smirnov can show her how to fire them – and in the hope of shooting him through the head.

It’s too late for Smirnov though, he’s already smitten : “She is a woman! That’s the sort I can understand! A real woman! Not a sour-faced jellybag, but fire, gunpowder, a rocket! I’m even sorry to have to kill her “

You’ll have to come and see the show to find out the ending but it’s great fun with some wonderfully comic moments. The second half of each performance keeps up the Russian theme with an informal reimagining of Pushkin’s great party scene from Eugene Onegin and its ‘entertainments’. Tatyana’s Party Pieces is a mix of music, poetry and prose, some familiar, some less so as a prelude to MWO’s performances of Tchaikovsky’s great opera Eugene Onegin, touring in spring 2018.

View all the dates for the SmallStages tour of The Bear November – December 2017.