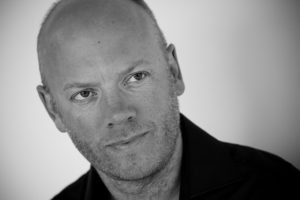 Baritone Adam Green joins Mid Wales Opera this Autumn in the role of the rough-hewn debt collector Smirnov – The Bear in the title of Walton’s classic comedy on tour from November 2nd.

Previous operatic roles include at English National Opera include Belcore (The Elixir of Love), Arbace (Idomeneo), Aeneas (Dido and Aeneas). Other roles include the title role in The Barber of Seville for Welsh National Opera, Il Conte (Le Nozze di Figaro) at the Musique Cordiale Festival and Iford Festival.

In the past, work has taken him right across Europe – but he’s looking forward to the chance to really explore Wales with our SmallStages tour of The Bear.

However, when he’s not on tour, Adam is also Founder of the Prison Choir Project, a charity that rehabilitates inmates through opera and song – a pathway towards establishing a reduction in reoffending, building self-esteem, improving self-confidence and employability skills for all those involved. In July, the charity staged Bizet’s Carmen at HMP Dartmoor with Adam as Music Director.

He told us: “We started work on our Carmen project at Dartmoor with 20 inmates, and had no idea if they could sing the six choruses we have chosen. It turned out 16 were fine tenors, and could really sing.

“By the end of week one they had learned all six choruses from memory. We gave two performances in the Prison, for prisoner families, fellow inmates, staff and guests –  it was an absolutely extraordinary experience. One of the highlights for me was a transgender, pre-op inmate who was able to take the role of one of the gypsy girls and come on with the cigarette girls really embracing the opportunity to perform.”

Adam and his team will be back at the prison to prepare a Christmas carol performance and intend to return each year to work with inmate.

The following review, written by Nick, 80 years young and an inmate at Dartmoor Prison, explains why he’s determined to return:-

“Take a group of dispirited, demoralized and devalued men called convicts. Persuade them they can join together in producing a famous musical extravaganza that’s good to look at and brilliant to hear. Do it in a barren, famously grim setting known as Dartmoor Jail. Make it a thunderous success. That’s what the man from ‘outside’ did. He came among us one day with his passion for music, his prodigious ability and a committed energy that carried us along with him. 3 weeks later, he had inspired us beyond our dreams. We were in Seville helping to create those Spanish rhythms. We sang with Carmen, we tried to woo those achingly pretty ‘factory girls.’ We could feel the heat of the midday – and, yes, we had our day in the sun. Now the magician is gone. He and his theatre troupe – those enchanting singers and instrumentalists are a memory – gone to that great, free outside. But we whom you inspired, we’ll never be quite the same again. Bravo, bravo, bravo.”

For more information on Adam’s work with the Prison Choir Project go to – www.prisonchoirproject.co.uk

Mid Wales Opera is bringing its brand new SmallStages tour to venues where opera is rarely seen. Enjoy this classic comedy in one act at a venue near you this Autumn!