Now we’re officially on the road, we wanted to give you a proper low down on how we’ve put together this brand-new version of The Beggar’s Opera and what you can expect if you come and see it!

So how long is it? And is it all sung?

The first half of the evening is Mrs Peachum’s Guide to Love and Marriage, and it’s 56 minutes long, with 34 songs from John Gay’s Beggar’s Opera. As our Music Director Jonathan Lyness explains below, there’s a lot of dialogue but the music becomes more continuous as the story progresses.

The show is based on the Beggar’s Opera, but uses only three characters from the story (though other characters have been amalgamated into our three singers’ roles).

We’re in the 18th century underworld in London and Mrs Peachum runs a busy racket with her husband, managing a gang of thieves and prostitutes with entrepreneurial efficiency. Her daughter Polly has grown up in the business yet somehow manages to remain a romantic soul at heart. She’s fallen in love with a highwayman from her mother’s gang and married him in secret.

Mrs Peachum is furious and sets about getting her daughter’s husband hung, Polly plots her revenge against her mother and the hapless Filch tries to keep the peace!

What about the second half?

If you’ve seen any of our previous SmallStages shows then you’ll know you can expect the unexpected in the second half! It’s a mixture of beautiful folk songs from our singers’ home nations so ‘She Moves through the Fair’ from Ireland and Carolyn Dobbin, ‘Lliw Gwyn Rhosyn yr Haf” from Wales for Alys Mererid Roberts and ‘The Foggy Dew’ from Johnny Herford for England.

There are also excerpts from Mozart’s Marriage of Figaro to get you ready for our Spring tour and Don Giovanni (because it’s lovely and Alys and Johnny sing it beautifully) We’ll leave the rest as a surprise but expect a bit of a cockney knees-up thrown into the mix as well.

We’ll leave the rest of the questions to our cast, band and artistic team – and see you all soon! 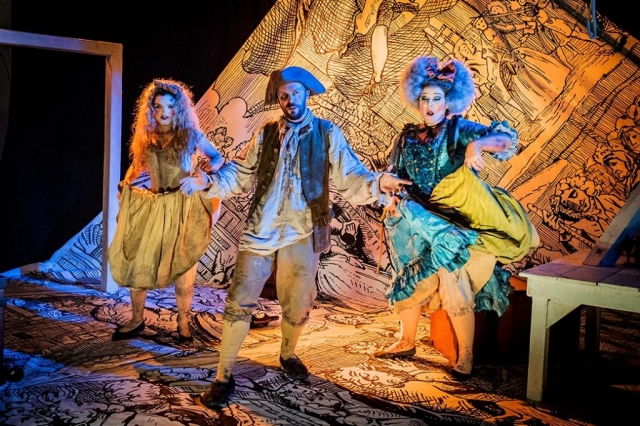 Why did you decide to adapt the Beggar’s Opera?

“The Beggar’s Opera is a show which I have known since my student days and have performed in and directed many times. It struck me that there was a fantastic character in Mrs Peachum and although she only appears for 20 minutes in the original show she has great presence and great lines. Mrs Peachum’s Guide to Love and Marriage has allowed me to construct a whole show around her, Polly and the Beggar.”

How did you create the new show?

“The biggest element of the work for me was writing the new version which brings together about eight different characters from the original in the character of Mrs Peachum and about six in the Beggar’s role. Having completed that it was a matter of putting together the jigsaw piece elements of the show.

“I think the message we’d like to pass on to audiences with this show is never to be afraid of trying something new. This is a restoration comedy, which might not be something you would initially think you’d book for but it’s great fun – no one will leave the show without a smile on their faces.”

Tell us about creating a score for this new work

“I’ve known the Beggar’s Opera for a long time and but obviously this is a new version of the story. The first element of my work began when Richard had created the new version and sent it to me in draft last Christmas, which I took away with me on holiday and spent many happy days mulling over.

“Then I opened up my score of The Beggar’s Opera with its single stave melodies and just little snippets of songs. I started in the middle of the show with Filch’s song ‘The heart of a man” thinking ‘ this sounds to me like a French café’, then moved on to Polly’s song about her education in a bar and thought ‘this sounds like a brothel, how do we get that over in the music’. I hopped around the score, working in different places and working on a few bars at a time. Gradually a full score took shape and it felt like putting together random jigsaw pieces.

“Richard has taken John Gay’s text and reassigned it to different characters to create this new version. Starting with the underlying text the music started to become more continuous as I kept working, so by the end of the piece it was nearly all set to music, I didn’t know that was going to happen it was just how it worked with Richard’s text.

“I tried to make the whole thing fun and quirky, and sometimes romantic in places as well. Really all the music is folk song and I wanted it to be very easy for the audience and singers to get into, and to keep it accessible and easy to understand and enjoy.” 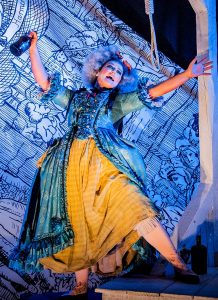 Please tell us about Mrs Peachum

“Mrs Peachum isn’t likeable at all. She’s definitely the boss though whereas in the original her husband is very much in charge, and it’s nice to play a strong female character in an opera.

“She runs this racket, where people are bringing in stolen goods and she’s in charge of the whore house. It’s an amalgamation of many small characters from The Beggar’s Opera and she’s a strong woman who couldn’t do what she does without a lot of charisma.

“The show’s a great laugh from beginning to end and some of Mrs P’s lines are hysterical particularly on the joys of widowhood, a state she appears to be looking forward to hugely despite her husband’s rude health!”

Alex is a veteran of MWO’s SmallStages touring and has been involved in all three of our Autumn productions to date.

How does this show work for the musicians?

“I love working in these small venues and it feels very much like chamber music, a very different experience from performing in the pit for the main stage shows, and there is a lot of interaction between us as musicians and the stage. The audience also get a much closer and more interactive experience of the shows. It’s also a very different experience for us as players, walking into new venues and trying to work out where we will be and how it will all work – but it’s a huge amount of fun.”

Tell us about Filch the Pickpocket and the Beggar

“The idea is that my character, the Beggar, is also the author of the opera and has come up with the story as well as being part of it.

“I really didn’t know what to expect when I signed up for this, and the music hadn’t been written at that point! It is great though and parts of the story are really unexpected and quite harsh but there is lots of colour in the music.

“The second half continues the themes of love and marriage, with some music from Mozart’s Don Giovanni and The Marriage of Figaro as well as folk songs, some comic songs and a bit of a London knees up in honour of the Beggar’s Opera. The whole show’s really entertaining and funny, surprisingly moving in parts, and I think people will thoroughly enjoy it.”

Tell us about Polly Peachum, and coming back to perform in rural Wales

“Polly Peachum is young and romantic, quite naïve really, but she’s got a very feisty side to her and some real fire in her belly. Her relationship with her mother is difficult, to say the least – she’s married a highwayman without her mother’s permission and her mother’s trying to get him hanged!

“I’m really excited by this tour and it’s great to be coming home to Wales. I was brought up in Rhoslan in North Wales so visiting Barmouth and Colwyn Bay will be a trip down memory lane!

“I’ll be staying with Mam when we tour up to North Wales, and taking my favourite train journey down from Criccieth to Barmouth for the show at the Dragon Theatre – arguably the most beautiful train journey in the world – but then I am a bit biased! I’ll have to schedule in a visit to the Las Vegas Amusements before the performance at the Dragon Theatre for old times’ sake!

“I travelled a lot of Wales as a child singing Welsh folk songs and Cerdd Dant in local and national Eisteddfodau so it will be lovely to revisit a lot of these beautiful areas as a professional and hopefully see some familiar faces in the audiences too!”