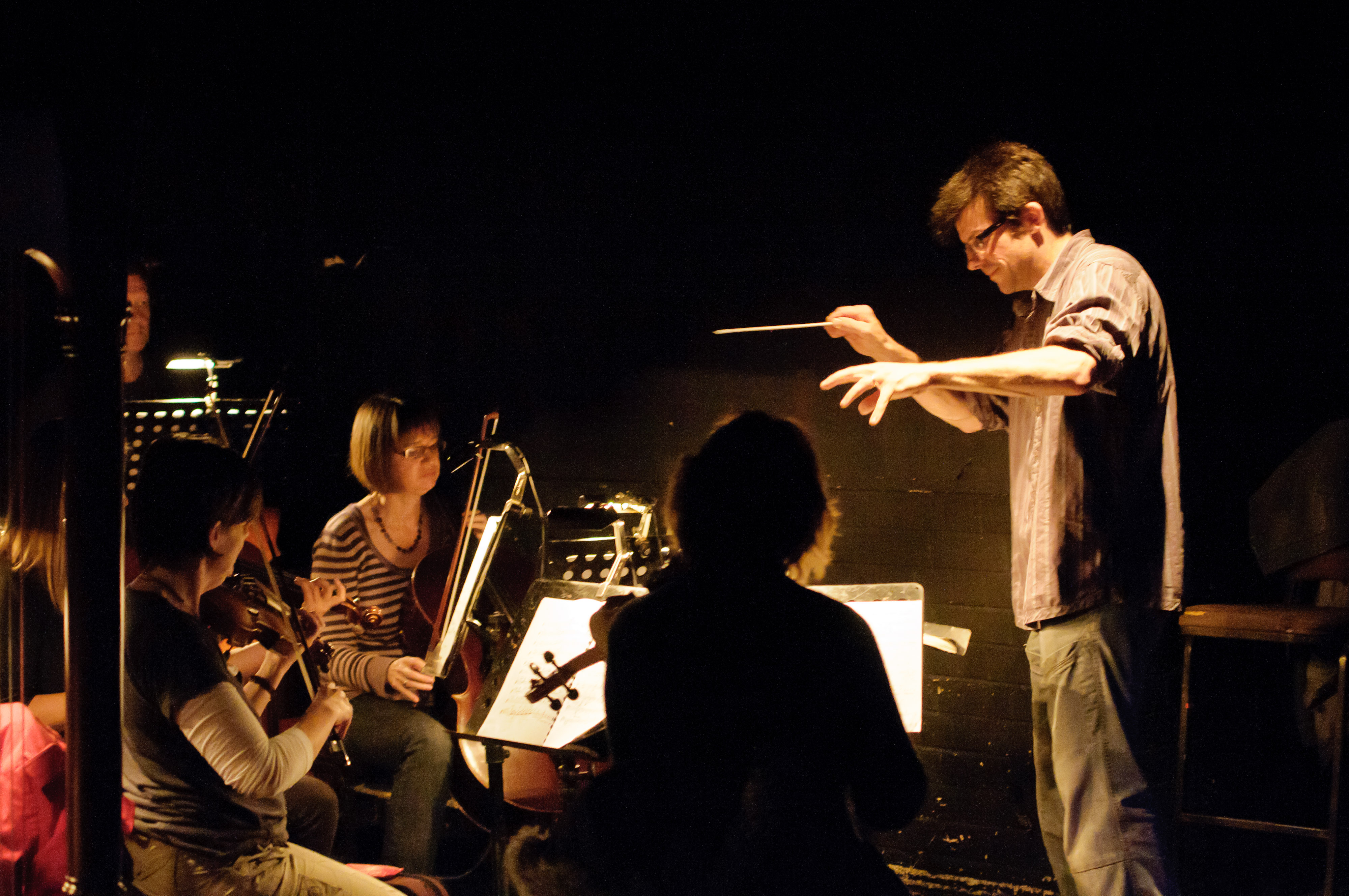 Traditionally, opera is one of the most spectacular of art forms – breathtaking in its scale and scope. That epic presentation has its place, but with our SmallStages tour we wanted to show a different side of opera, allowing audiences to get closer to our performers and see opera on a completely different, more intimate and personal scale.

So how do you go about turning an opera score into something which can be played by just five musicians? Our Music Director Jonathan Lyness is an expert with more than 25 years’ experience and explains below how he approached the chamber arrangement for MWO’s production of The Bear this Autumn.

Over the last few decades the emergence and expansion of small to mid-scale opera performances across the globe has been phenomenal. The composer Benjamin Britten set a precedent in the 1940s with his chamber operas The Rape of Lucretia and Albert Herring, the importance for Britten being the balanced reduction in size of all operatic elements. Using a small orchestra (12 players) and a small cast (around 8 – 13 singers), Britten created an economically and artistically viable way of having new operas performed, reaching out to new audiences.

And audiences are the key, in both diversity and demand. From city suburbs to country barns, people of all backgrounds have flocked to see not only singers at close range but also musicians delivering solo lines, with concentration imbued on their faces, something that audiences at big opera houses rarely experience. In small-scale opera, balance between numbers of singers and players gives a meaningful representation of the original full-scale conception and for the most seasoned opera-goers, such a small-scale production of a great operatic classic can be a revelation, whilst for the novice, it expels the myth that opera is inaccessible and elitist.

But how has this been achieved? During this period, ‘reduced orchestrations’, or ‘orchestral reductions’, as they’re known in the trade (either term is valid), have grown in number, executed by a quiet consortium of arrangers (of which I have been one for some 25 years). And the mission? To take an orchestral score of an opera and arrange it so that it can be performed by a ‘Britten-sized’ chamber group.

Between 10 and 12 players is the magic number – five string players, five wind players and, perhaps, harp and percussion. Variants include potential doublings (players who play more than one instrument, as is often the case in Britten, though rarely at the same time!). Some arrangers have experimented with more eclectic groups of players, and all will have their own ideas on what an arrangement should constitute, with some creating idiosyncratic interpretations of the composer’s original score. For my part, the challenge has been to create the illusion to the audience that the composer either wrote the arrangement him/herself or that no arrangement has in fact been undertaken. If an audience member attends a performance that uses my reduced orchestration and notices nothing untoward, I consider that a success!

The Welsh touring company Mid Wales Opera has a long and illustrious history of touring small-scale productions, as described above. However, an idea has recently emerged of adding another tour to MWO’s calendar. This would be no standard tour. The concept was to take a one-act opera (always a tricky customer, difficult to program and to sell) from the twentieth century repertoire (even more difficult to sell with potential complications concerning copyright), reduce its size to something that could fit into the back of an estate car (this was beginning to sound preposterous!), make sure equal attention was paid to numbers of musicians as well as singers (inevitably requiring an arrangement of the score) and take it all over Wales to outlying and/or deprived communities where opera is rarely, if ever, performed.

Just as Britten thought outside the box, the ambition was to deliver a financially and artistically viable solution to the challenge of opening up opera in all its guises to audiences, young and old. MWO’s first foray into this way of doing things takes place this autumn, with a fifteen-performance Welsh tour of William Walton’s classic comedy The Bear.

The piece is scored for a small chamber orchestra and my target was to arrange the score for about five musicians, to accompany a cast of three singers. My approach was not ‘which instruments can I take away’; instead, I thought ‘which instruments most characterise the piece – how does Walton create instrumental sentiment and character to enhance the work’s impact and comedy.’ The first instrument that sprang from the full score was, unexpectedly, the bassoon. The widow Madam Popova is in mourning and Walton plays on this using a gently falling bassoon melody. In the closing pages, a string instrument (either violin, viola or cello) would deliver the burgeoning romanticism between Popova and Smirnov (the ‘bear’ of the title).

The piano, harp and percussion are integral to Walton’s sound world and so, together with bassoon and, on final reflection, a violin (doubling viola), I had my five-piece grouping. With no conductor, this is chamber opera in its truest guise, and MWO’s forthcoming Autumn 2017 tour, whilst forfeiting previous plans of putting an opera into the back of an estate car, will, it is hoped, be the beginning of a whole new way of audience building across rural Wales.

Click on the link for full details of MWO’s #SmallStages 2017 tour of William Walton’s The Bear.