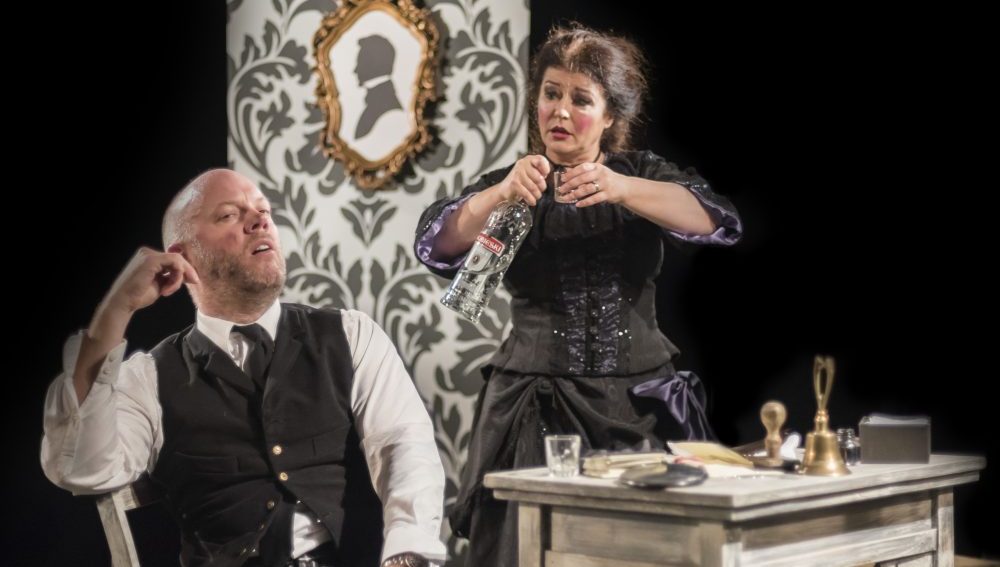 We’re so excited that BBC Radio Wales’s Country Focus team, Pauline Smith and Rachael Garside joined us for the show in Ystradgynlais to talk to us about what goes into creating our SmallStages tour of The Bear.

Grab a cup of tea and enjoy the full programme telling the story of how we make a night at the opera, from the get-in right up to the overture, and including rehearsal clips from our brilliant musicians and singers:

By joining us as the set was prepared in The Welfare they managed to capture the hands-on spirit of touring at this scale – and catch up with some of the less public elements of the work behind the scenes our first ever SmallStages production.

The first person to arrive at the new venue was our Production Manager Bridget Wallbank – Bridget has been with MWO since the start – and is responsible for everything from creating the set based on the designer’s sketches to scheduling and even driving the van.

“I have loved this tour,” she told Rachael, “It’s a real challenge and we’ve been everywhere from the end of the Llyn in a church in Aberdaron with 60 mile an hour winds to village halls and proper theatres. Audience are absolutely loving the fact that we are coming into communities and bringing the show to them.”

Having been with Mid Wales Opera since the first show in 1989, Bridget’s seen the company through some real ups and downs. She added:

“It’s great that we’re now on an up, the key has been adaptability and the fact we’re in Mid Wales helps us to feel we’re not hidebound by what people think they should do with theatre and opera – we can build a show in a village hall or in my yard at home.”

Travelling with Bridget in the van is Artistic Director Richard Studer. One of Richard’s key challenges has been designing a set which would work in every space from a 10 foot by 14 foot floor in the front of a church to a full stage. He’s toured with the production – shrinking the set and staging to fit each new space, he explained: “The feel I wanted was to have a sense of open space,  and a sense of Russia. We’re playing the whole show on one set which is based on a turf lawn, with birch trees made from metal poles growing out of it and a large backdrop of beautifully painted wallpaper design…plus it all has to fit in a Transit van.”

Percussionist Max Ireland is another early arrival on set – around two hours before other musicians and the singers to ensure he can set up his 20 instrument strong percussion area. For Max as a freelance musician more used to working with Welsh National Opera or BBC NOW the scale of our Bear tour has been a revelation.

“We’ve really had a good time with this tour,” he told Rachael, “I didn’t know anyone in the company before we all met in Presteigne, somewhere I had never been before, but we arrived and the set was up, everything was ready and we all went for a pint after the rehearsal, it’s been great getting to know new people.

This show has been quite exceptional really, the way it has been scaled down with this amazing arrangement by Jon Lyness. It’s been fantastic as well to be able to take this work to smaller venues – you can go to a big theatre and get half an audience but we go to a small hall that we’ve sold out and where people have never seen anything like this before – and they are really grateful to MWO for taking the time to bring live opera to their community.

I love opera, and to take it to people who can’t afford to pay £70 per ticket to go and see it at the Wales Millennium Centre is fantastic – plus this is a really high class production which we’re bringing to them.”