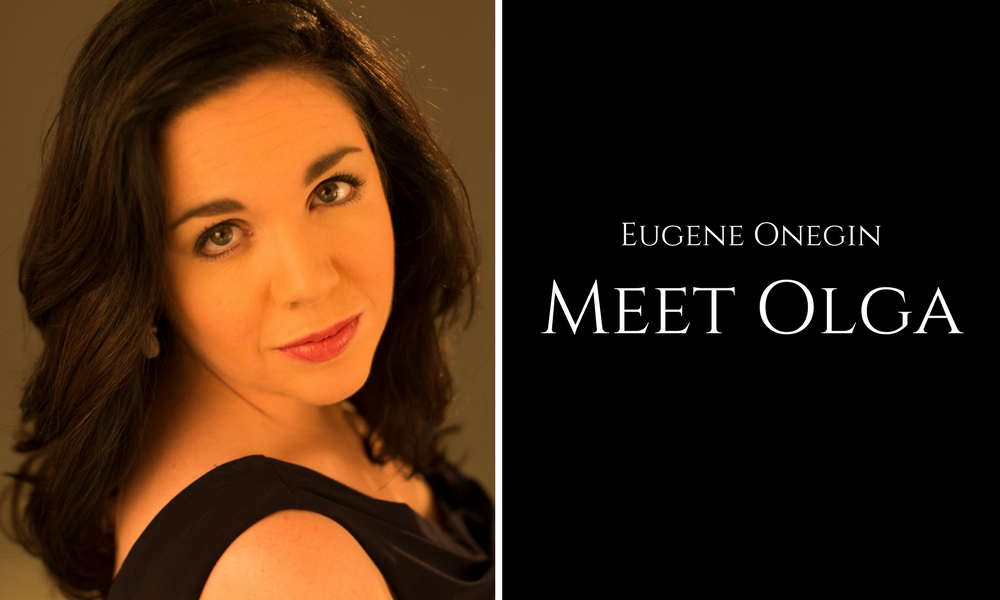 Find out more about our lead characters Onegin & Lensky and Tatyana.

Pushkin describes Tatyana as “not a beauty like her sister”, while Olga, the younger sister, is a Romantic ideal of womanhood: –

Her eyes were of cerulean blue,

Her locks were of a golden hue,

Her movements, voice and figure slight

As the opera opens, Olga is already in love with Lensky who introduces his friend Onegin to Tatyana on a visit the Larina sisters’ family home. Olga’s a much more playful character, with none of Tatyana’s bookish tendencies or introspection. However, her joyful but thoughtless nature is the catalyst for tragedy when Onegin’s flirtation with her at a family party leads to his duel with Lensky – leaving Olga devastated by the loss of her lover.

Ailsa Mainwaring who plays Olga in our production can’t wait to get her teeth into this fascinating mezzo role.

“Olga’s a brilliant character to play – she presents herself as happy-go-lucky, a foil to Tatyana in many ways, but I think it goes deeper than that. She’s learning to navigate her way around a society that places a lot of expectations on women (aren’t we all!) and sure, sometimes she makes mistakes – big ones – but she’s just trying to figure out how to be a woman, she never means any malice by her actions.”

Listen to Olga’s Aria – sung in Russian below

Our upcoming production of Eugene Onegin will be sung in English

But I am quite unlike you,

I feel merry when I hear singing.

dancing a few steps
‘Across the bridge, the little bridge,
along the hazel planks …’
I was not made for melancholy singing,
I do not like to dream in silence,
nor, on the balcony in the dark night,
to sigh, to sigh,
to sigh from the depths of my soul.
Why should I sigh, when full of happiness,
my youthful days flow gently by?
I am carefree and full of fun,
and everyone calls me a child!
For me life will always, always be sweet,
and I shall retain, as I always have,
light-hearted confidence,
be playful, carefree, merry!

Ailsa added “I love that Tchaikovsky has written Olga for a true mezzo-soprano voice, but the music is so young and bright, never weighed down. That’s quite a rare thing to find.”

“What I love about Onegin is that it’s a window into a different society, painted so vividly through people’s behaviour, their language, and of course the glorious music. It’s so subtly nuanced that the characters are presented to us as living, breathing people, which makes us care about the drama all the more.”

The piece also holds fond memories for Ailsa: “Onegin was the first piece I worked on at Garsington Opera, singing the role of the Nurse in a schools’ performance in which all the understudies got to go on, so it’s pretty special to me.”

Touring Wales will also bring back some memories – in particular, visiting Milford Haven, she told us: “My first experience of Pembrokeshire was successfully putting up a six-man tent in a gale, on top of a cliff. We managed three nights in there before deserting to a spa hotel.”

London based rehearsals start at the end of this month, moving to Newtown in early February and we can’t wait to immerse ourselves in the wonderful world of Eugene Onegin.

Tickets are already on sale – dates and details are below