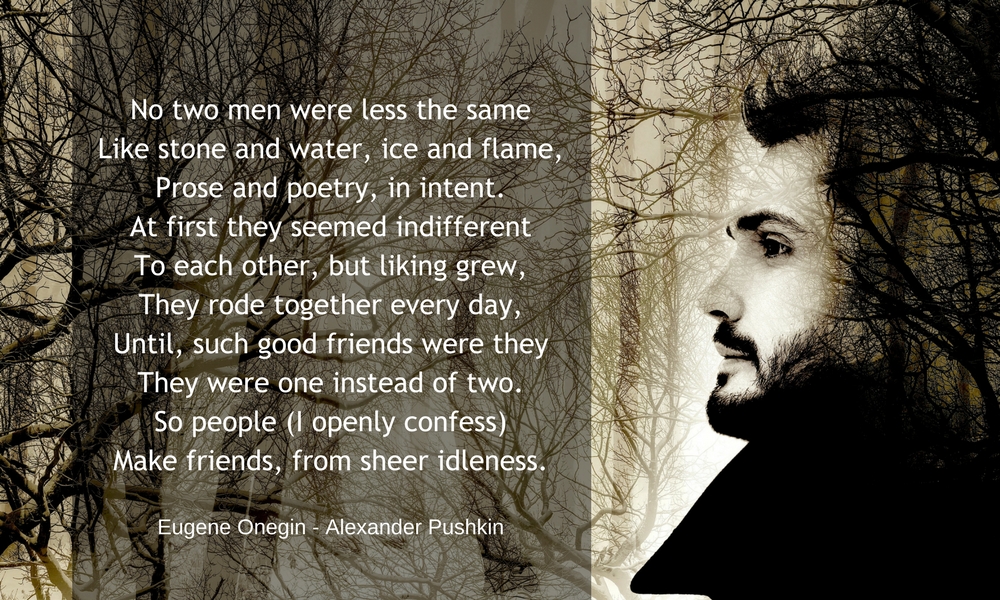 At the heart of Pushkin’s verse novel Eugene Onegin lies the relationship between two men – Eugene Onegin and his best friend, the poet Vladimir Lensky.

When we first meet Eugene Onegin he is jaded by the life of a society gentleman and “emptiness possessed his soul”. At the news of his uncle’s coming death, he abandons his sophisticated city life and races off to his uncle’s country estate. Inheriting the estate, he hopes to establish a new pattern way of life but soon finds “the country caused the same ennui”.

The Stranded alone among his possessions  “Our bored Onegin” offends his neighbours until they cease to call. That is until he meets his newest neighbour, the poet Vladimir Lenksy:

Handsome, young, a Kantian,
Whose soul was formed in Göttingen,
A friend of truth: a poet then.
From misty Germany he brought
The fruits of learning’s golden tree,
His fervent dreams of liberty,
Ardent and eccentric thought,
Eloquence to inspire the bolder,
And dark hair hanging to his shoulder.

Lensky is his polar opposite, with his “poet’s bold empassioned speech”.

No two men were less the same
Like stone and water, ice and flame,
Prose and poetry, in intent.
At first they seemed indifferent
To each other, but liking grew,
They rode together every day,
Until, such good friends were they
They were one instead of two.
So people (I openly confess)
Make friends, from sheer idleness.

For our Spring Tour of Eugene Onegin, Welsh tenor Robyn Lyn Evans makes his role debut in the role of Lensky – having previously sung the role in Welsh in competition at the National Eisteddfod.

“Eugene Onegin is an opera I’ve been waiting for the opportunity to perform for a long time. It’s got such beautiful music. I’ve never performed Lensky before, but everyone tells me it’s such a fabulous rôle. I’m also really looking forward to singing Lensky’s aria in context, as I did sing it some 20 years ago in the National Eisteddfod of Wales, however, that was in Welsh!”

Our Eugene Onegin is sung by charismatic Baritone George Von Bergen, experienced in the role and well used to dealing with the complexities it represents. 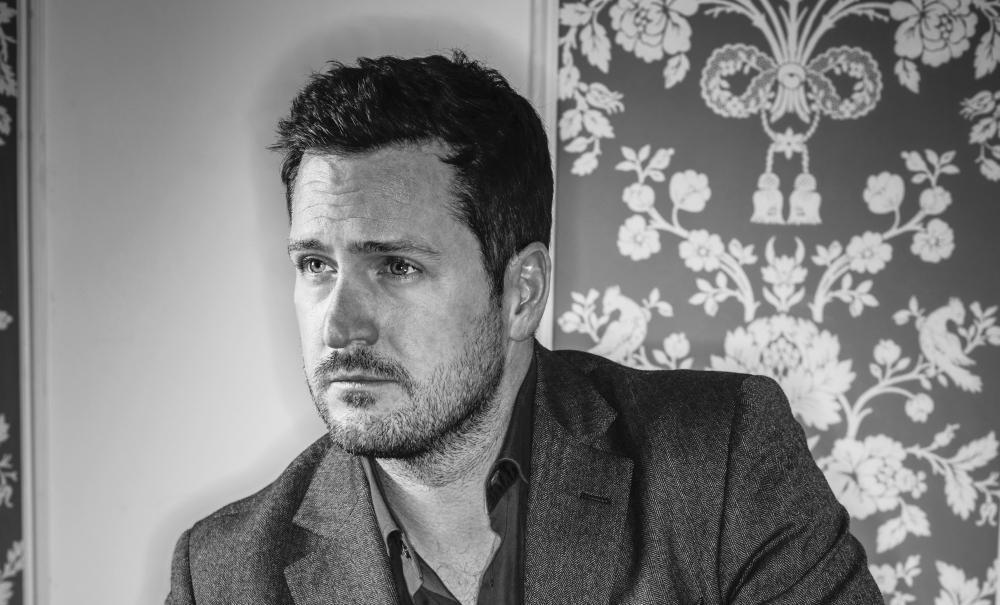 “When I first performed Onegin in 2006 I was struck by the emotional immaturity of Onegin in stark contrast to the world weary life that he has already led as a young man.  We can relate to the character with his outward arrogance and seemingly frosty facade, concealing a sensitive and vulnerable man beneath.

“His series of bad decisions compel him to his wretched and desperate position in Act 3, but audiences can rarely forgive him his mistakes and despite Lensky’s absurd hysteria in challenging him to a duel, his earlier, pompous dismissal of Tatyana seem only unjustifiable.  It’ll be exciting to find out how we’ll be interpreting the piece.  Will Onegin be a fallen hero or villain?”

The complexity of Onegin’s character – and the depth of his regret at the life-changing mistakes he makes make for a compelling story which opera lovers can return to again and again, and which new audiences can explore for themselves accompanied by Tchaikovsky’s beguiling and sensuous orchestration.

Our production will be led by MWO’s Artistic Director Richard Studer and Music Director Jonathan Lyness. Their most recent production of Eugene Onegin, in Bristol, in 2012 was exceptionally well received and the Guardian’s reviewer wrote: “I left the theatre reeling from the experience. It was all realised with the highest musical values, a remarkably strong cast and vividly portrayed under Richard Studer’s direction.”

Tickets are already on sale – dates and details are below.