In my previous blog I described how, at the point of the first lockdown, I’d started work on a new reduced orchestration of Janáček’s great opera The Cunning Little Vixen. The plan has been to perform this transcendental work with Mid Wales Opera as and when things get back to some kind of normal, but when this will be, no one really knows. However, on Monday 9th November I got to hear my new arrangement for the first time. On that Monday morning, and following my habitual 7.00am ‘wake up’ coffee, I jumped in the car and, via foggy Hereford and Monmouth, drove to the stage door of the Hoddinott Hall in Cardiff, contained within the Wales Millennium Centre and home to the BBC National Orchestra of Wales.

For someone accustomed to the backstage facilities of some of the UK’s illustrious summer opera festivals, or the numerous and sometimes unfathomable corridors and staircases of theatres across Wales and elsewhere, the Hoddinott Hall is another world. For a start, at no point did I climb a staircase and then wonder where I was! It seemed to me that, in this respect, it even put the new Royal Opera House to shame (on the few occasions I’ve been immersed in backstage corridors there, I really have lost my bearings). Perhaps it was the BBC’s COVID-safe one-way system that helped, effortlessly at ease with the natural flow of the building and not without a hint of ‘follow the yellow brick road’. How could anyone possibly get lost or disorientated?

The hall itself is a revelation. As rehearsal studio, concert hall and recording venue, its acoustics are magnificent – generous and warm, yet detailed and refined. Perhaps, with hindsight, this wasn’t the best place to road test an arrangement that, out in the field, will need to survive in venues not quite as invested with such acoustic technology. That said, I wouldn’t have missed it for the world. Janáček, even in its original orchestration, needs all the help it can get. The last time I heard the piece live was at the Barbican in 2019 where Rattle, with the LSO, produced a miraculously beautiful sound out of the composer’s often tricky textures, helped, I’m certain, by what the Barbican’s dated acoustics still have to offer.

And so there I was, at 10.00am, with the BBC NOW players assembled and socially distanced (2.5 metres ‘nose to nose’, I was assured), and all of us de-masked and at our ‘workstations’ (I’m really getting into the lingo here). It’s always a bit of an adventure working with a group of new players, not to mention slightly nerve-wracking, but within seconds of getting going I knew it was going to be a good day.

People often discuss and compare their favourite openings of operas. Truth be told, most famous operas have great openings. For me though, Janáček takes some beating and the opening of Vixen (along with that of the same composer’s Katya Kabanova) is the most breathtaking. From bar one he creates a woodland world that is atmospheric and mysterious. Instrumentally, the opening contains a sign of things to come, with a plaintive theme on the violas, gently flowing violins, and a supportive cor anglais, that melancholic instrument made famous by the composer’s great Czech compatriot Dvorak in his New World Symphony.

Bar two sees Janáček introducing one of this opera’s trademark ‘effects’, and the first obvious challenge of the day. The violins, with a rush of quick short notes, are instructed to play ‘col legno’ – that is, with the wood (or stick) of the bow being bounced off the string. With a full orchestra one can virtually here the sounds of small mammals scurrying through the wooded undergrowth. But in my arrangement, I have the princely sum of just two violins. Nevertheless, with a half ‘col legno’ – that is, with the bow on its side so that both hair and stick touch the string – the two violinists created their own brilliant effect, albeit within the Hoddinott’s wonderful acoustic.

The day continued, and it was great to gauge players’ reactions to what was being asked of them. I loved the way the clarinettist (who I remembered from when we overlapped as students at Bristol University some 30 years ago) raised his shoulders and eyebrows as all clarinettists do when asked to play something unexpectedly high and virtuosic. I loved it when the oboist looked suitably bemused when I asked her, at one of Janáček’s strange changes of metre, to keep playing but shut her eyes – ie, not look at me! And I loved hearing the harp and glockenspiel spontaneously and ingeniously mimicking the sound of a celesta. Vixen, with the cycle of life at its heart, appears to have been an apt choice for such a year and such a day as this; as we reached the end, so good was the sound that I made the BBC musicians play the last section one last time, and as the whole building seemed to resonate I felt, perhaps, a similar sense of renewal to that which this opera is all about.

The day ended at 5.00pm and I was sorry to leave. The string players, dog tired, had a Bartok Divertimento rehearsal scheduled for that evening. Others left the building whilst chairs were sanitised, stands re-positioned and Vixen music put away. With all of the ceremony of my morning arrival – the welcome, the guidance, the health and safety, the ‘yellow brick road’, the fabulous dressing room (MWO please take note!) and the sheer glamour of the hall – my exit was hilariously unceremonial. On leaving my dressing room I turned left (as instructed), straight out of a fire escape and down the external metal stairways to a non-descript bit of tarmac outside the building. From there I found my car and drove out onto Bute Place and into Cardiff’s rush hour traffic.

BBC Radio 3’s October 31st edition of Building a Library on The Cunning Little Vixen is now available as a podcast: 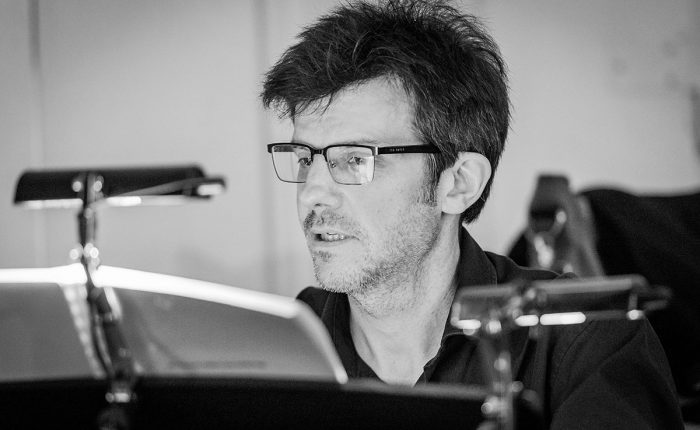 Working in lockdown on The Cunning Little Vixen