We’ve been back to school this month – taking over the whole curriculum for a week firstly in Arddleen CP School and then in Buttington Trewern School, both near Welshpool in Powys.

We’ve worked with 102 junior age children during the two, week long residencies, with each school creating its own unique performance to share with infant children and parents, each with their own original stories and songs – many of which we’re still singing along to in our heads! 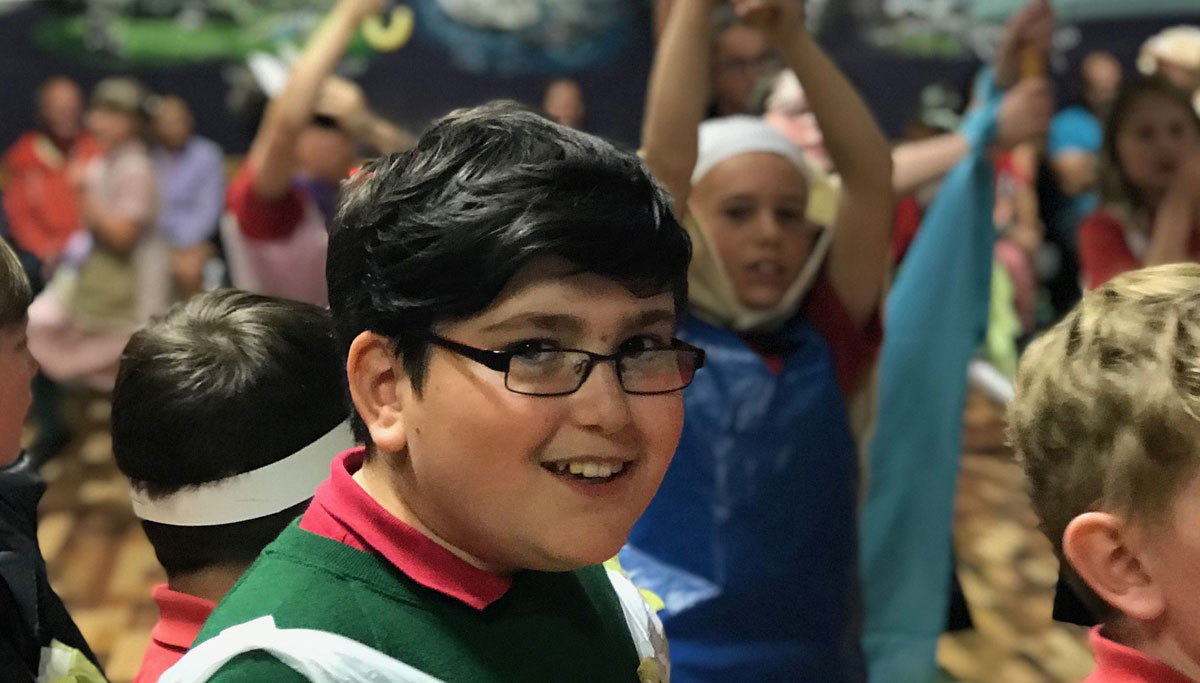 MWO’s Artistic Directors Richard Studer and Jonathan Lyness led the residencies, with the children writing their own songs and dialogue, creating plots and making costumes based on bin bags and the contents of schools’ cupboards, ranging from sari samples to a toy crossbow!

Jon and Richard were ably assisted by professional opera singer Maria Jagusz and theatre practitioner Danie Croft – with our Executive Director Lydia lending a hand with costume. The residencies are funded by Creative Collaborations through Arts Council Wales – and as well as being brilliant fun they’re closely tied to the schools’ Estyn reports and school development plans.

“We all agreed that this project was a great enrichment opportunity which works very well alongside the new curriculum as it satisfies the majority of core purposes and Areas of Learning and Experience.

“These strengths were prominent throughout the week as you all extracted and enthused all pupils imaginations through the expressive arts including some wonderful extended writing. This activity catered well for the complete range of abilities and talents.

Pupils voice was clear and their input was at the forefront of the project.”

One Class 3 pupil in Arddleen put it far more succinctly:

The weeks started with a basic structure, based on the cartoon story of a little fox who got lost which originally formed the background to Janacek’s opera The Cunning Little Vixen.

The children then worked in two teams to explore where the fox might go next – in the case of Arddleen’s pupils to a land of fire and ice ruled by a dragon called ‘She’ and into space, in Buttington to the arctic and to Monte Carlo for the Grand Prix.

We’ve had narwhals and polar bears, space butterflies and space otters, foxes and wolves who drive F1 cars and chickens who eat lava….we’ve been completely bowled over by the infinitely imaginative, if slightly surreal, creative energy of Powys’ junior age children and it was great to see such wonderful team work!

We need to thank the very patient teachers at both schools – who found innovative ways to attach narwhal horns to policeman’s helmets and to put up with all the glue and fabric liberally distributed around classrooms. Huge thanks as well to all the pupils at both schools who worked so hard – da iawn pawb! You’re all superstars.

Quotes and Photos from Arddleen School 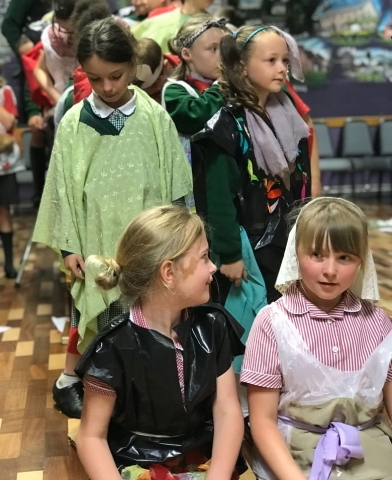 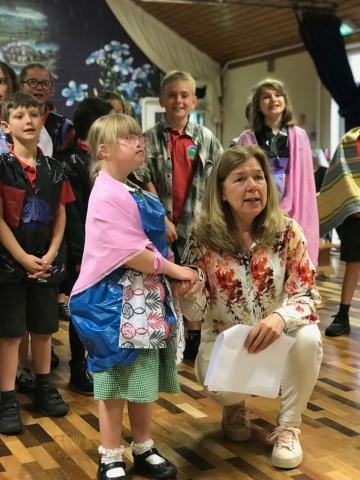 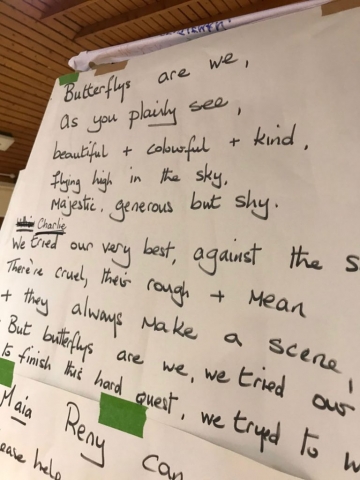 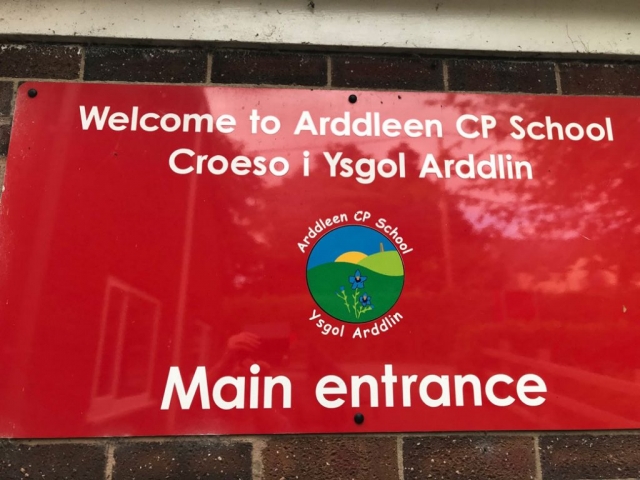 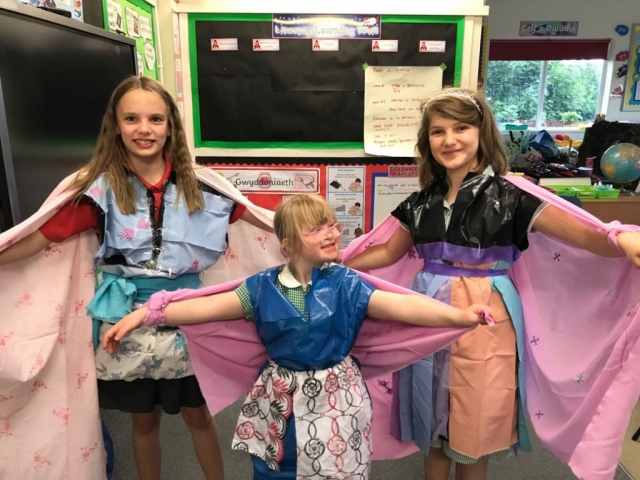 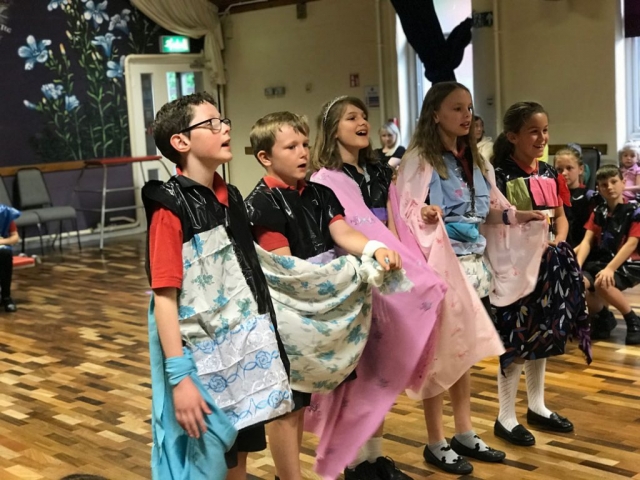 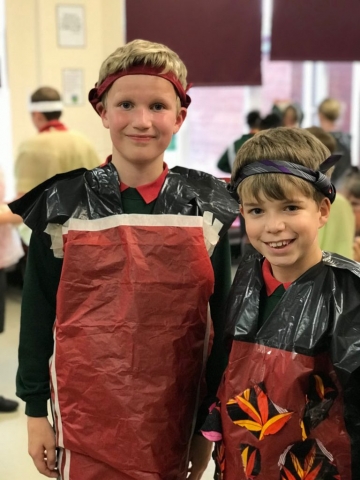 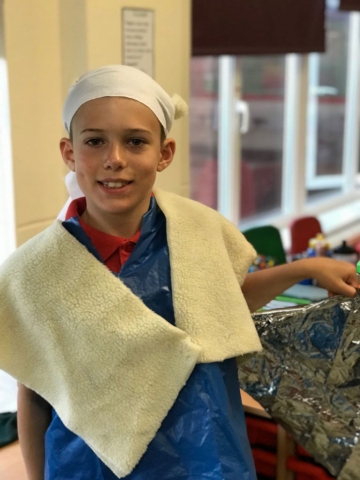 “Absolutely amazing, the most best feeling. Everything was fun and I really enjoyed working with you.” Class 3, Arddleen School

“I enjoyed the singing and dancing because I like to sing…it was great because we got to use our imagination.”
Class 4, Arddleen School 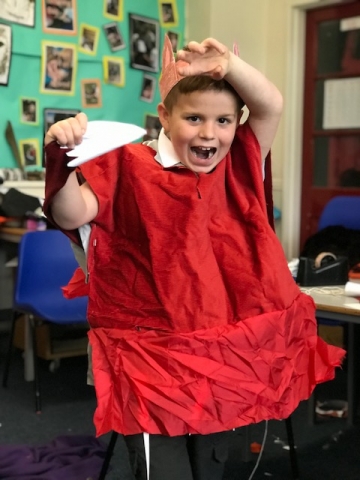 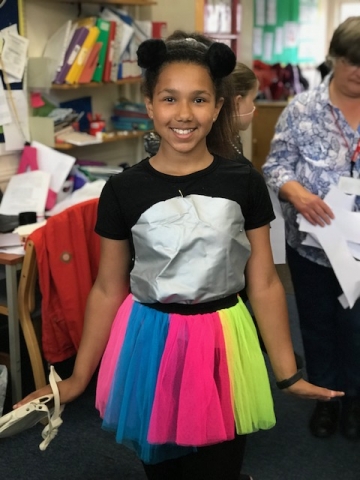 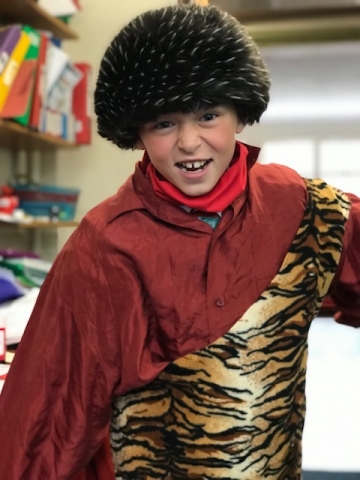 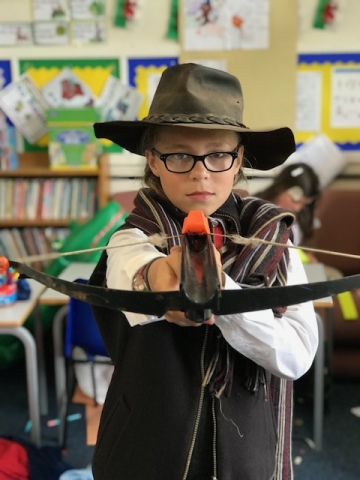 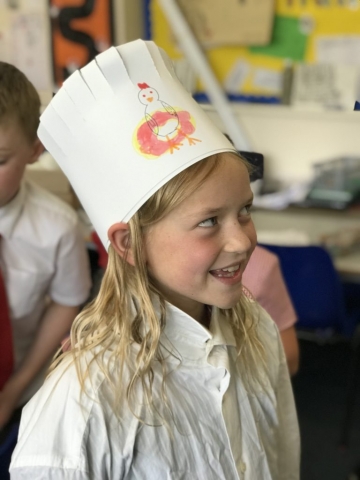 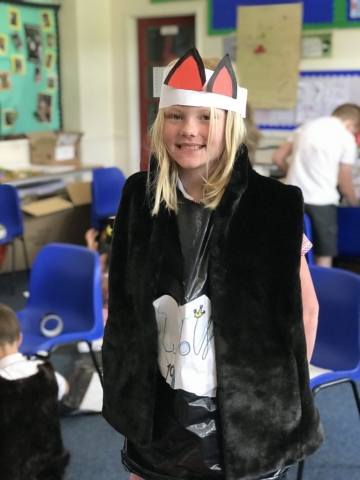 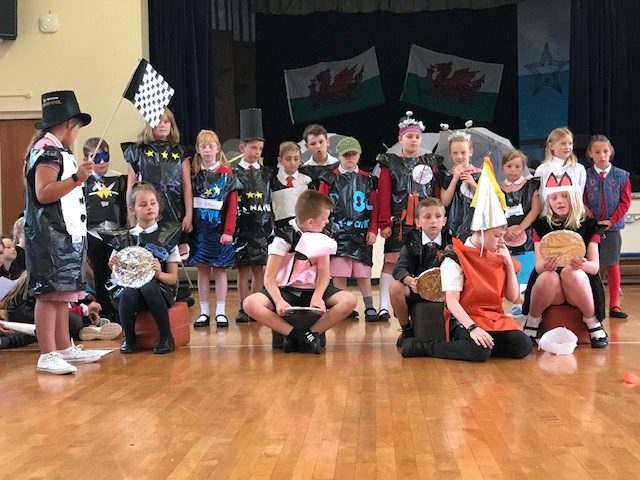 “every song we wrote sounded as if it could be on the radio.”
Year 5, Buttington Trewern School

“It felt amazing to write stories and have them featured in the storyline – and I felt proud to sing the ‘hunters’ song’ because I know I helped write it.”
Year 5, Buttington Trewern School